From Russia With Light: The Art of Violetta Chandler 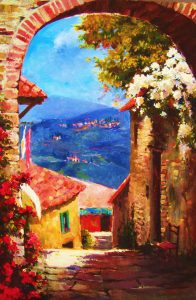 Luxuriant color, solid drawing and composition, ethereal light and physical movement in light, combined with a refined sensitivity to landscape, and still life painting and portraiture, characterizes the oeuvre of Violetta Chandler.

Born November 26, 1965, near Odessa, Ukraine, on the Black Sea. She is a fifth generation artist initially trained by her father Yakov Tsatskin.  In 1992 she graduated with honors from Odessa State Institute receiving a master degree in fine arts and teaching.

Many of her teachers at O.S.I were trained at the St. Petersburg Russian Academy of Art.

Chandler moved to Sarasota, Florida with her family in 1995.  She has taught at the Ringling College of Art and Design in Sarasota and St. Petersburg College in St. Petersburg, Florida.

As an original member of Plein Aire Cottage Artists She was awarded in May of 2007 the Florida Preservation Award for Historic Preservation.  She has also participated in several solo and group exhibitions, including Florence Biennale, Italy;  Dungarvan,  Ireland; Gulf Coast Museum of Art, Largo, Florida; Cornell Museum of Art, Del Ray Beach, Florida; Ringling Museum of Art, Sarasota, Florida; St. Petersburg Museum of History Solo Exhibition and the Capitol Meeting Room in Tallahassee.

In December of 2007 she received a lifetime invitation to participate in the International Juried Exhibition of the Florence Biennale, Italy.

Repin’s paintings are highly emotional and epic.  Yendogurov are spiritual and calm.  It should be noted that Repin’s classical earth-toned chiaroscuro has also influenced her portraits.  Because of her academic training in drawing, her portraits have intense precision in the eyes, arms, and hands.  While painting portraits the artist likes to talk with her sitter bringing out nuances of character in their posture.

The primary influence on her in regard to color is Claude Monet and in French Realism, Camille Corot and Gustave Courbet. Her color palette is in the Impressionist canon, but the application of thick pigment (impasto) is closer to French Romantic Realism.  These elements are combined with subtle light strokes that give her ideas an unassuming feel for the passage time.   Instead of graying down color in shadows, as in the academic tradition, she applies Monet’s idea of complimentary color in the shadow of a lit object’s principle hue.

For Chandler “painting is a dialogue rather than a monologue” with the sympathetic observer.   In reference to this, “my paintings can seem unfinished, because I want the emotional connection to the work by the viewer to be completed in their imagination”.

Her sensitivity to all the elements of art is demonstrated in the fact that her personal family photographs as well as her photo studies for paintings have all the clarity and balance to be expected of a well-trained eye.

One can easily enter the illusions of her paintings with the suspension of assumptions of arts historical purpose and the singularity of a certain style.  Entering her illusions of space and mood can be effortless, because besides from her professional training her work has insight about our place in the world and the pleasure of seeing light on vivid color.